Bring Back The Monarchs

Does your yard provide good habitat for wildlife? Although my town has acres of wild land and most of us here have seen wild animals roaming through our yards, nationwide 6,000 acres of wild land are being lost every day to development. As humans move in, most wildlife is forced to move out and unfortunately, sometimes they have nowhere to go and perish. 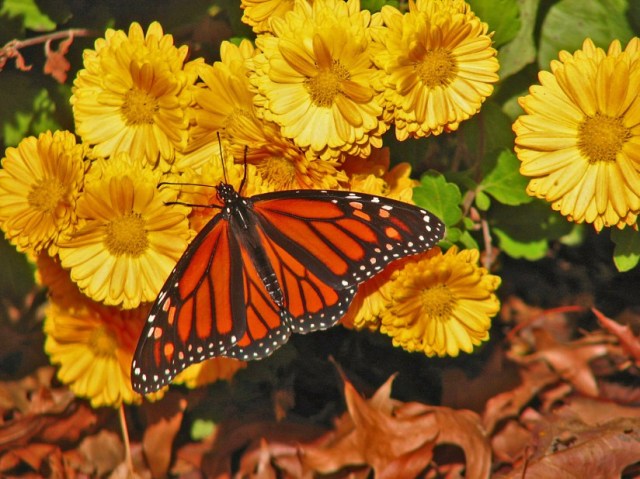 One example is the Monarch butterfly. Habitat destruction along its migratory route has impacted its numbers critically. Scientists estimate they’ve declined 90%. It saddens me to think of the world without this splendid creature which evolved a complex survival strategy over thousands of years. Migration is rare in the insect world. Every autumn,  adult Monarchs born that summer in northern states fly 2000 miles along migration corridors to wintering grounds in Florida, Mexico and southern California.

In spring, Monarchs fly north a few hundred miles, breed, lay eggs on Milkweed, then die. Their larva feed, pupate and emerge as adults to continue the journey taking four generations en route to reach summering grounds. Since Milkweed is considered a noxious weed and poisonous to livestock, farmers have launched a very successful campaign to eradicate it from their fields. Milkweed is no match for Roundup. Monarch larvae feed only on Milkweed. No Milkweed, no Monarchs.

The survival of the Monarch is in the hands of people like you and me all along their migratory route. If you have friends or family in any state in the continental U.S., urge them to plant Milkweed. Put up educational posters, contact your local newspapers and agricultural representatives. Support the creation of mow-free areas of Milkweed along the interstate highways and public land. Teachers, along with students and parents can create Monarch gardens at schools and recreational areas. Urge farmers to allow swaths of wild land along their borders that include Milkweed.

Our collective action in the next few years will determine the survival of this critically declining species. Devote a large section of your yard to several species of Milkweed (Asclepias tuberosa, A. syriaca and A. incarnata) for larva as well as nectar plants for adults such as Indian Blanket (Gaillardia pulchella), Purple Coneflower (Echinacea purpurea), Joe Pye Weed (Eupatorium purpureum), Scarlet Sage (Salvia coccinea), Mexican Sunflower (Tithonia sp.) and Zinnia, ‘Dahlia Mix’ (Zinnia elegans). For more information on how you can make a difference, check out www.monarchwatch.org. They offer ‘Monarch Waystation’ seed kits that consist of nine packets of the above species along with planting and care instructions.

The need is urgent and I implore you to take action now before this marvelous species vanishes from the earth forever.

Above photos courtesy of Robbie at http://palmraeurbanpotager.com

12 Responses to Bring Back The Monarchs

In My World
AT PATHO

comfort and joy from my home to yours

An Enthusiastic Gardener without A Garden

The Little Adventures of a Hiking Schoolboy

Life from the Tail End

Walking In Beauty Each Day

Photography for people who want to surround themselves with the beauty of nature.

Photography and Thoughts About Life and Aging