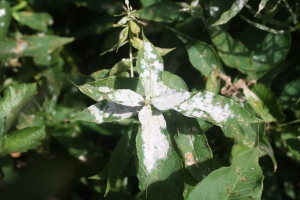 When rain is abundant in spring, just about every garden consequently suffers from some sort of mold, mildew or fungus problem come late summer. Unfortunately, once it becomes apparent that you have a problem, it’s generally too late to do much about it at this stage, but you can act to prevent future damage. What you are seeing are the fruiting bodies (spores) of the fungus that has been growing inside your plant since spring when spores were released by splashing rain or the wind.

Some plants are more susceptible to disease than others. Bee-balm, lilac and phlox attract powdery mildew. Hydrangea, aster and mallows are plagued by rust. Roses are magnets for leaf spot. There are many chemical cures on the market, but I try to limit myself here because the “side affects” are often worse than the disease. I don’t need a domino effect of environmental problems because I didn’t think something through. The best path for me is to follow as closely as I can methods employed by Nature to keep the balance. Sure, by the end of the summer my plants look a bit chewed up, but for the most part that’s what plants are – food. They can take some abuse; it’s when they are being wiped out that I have to step in. 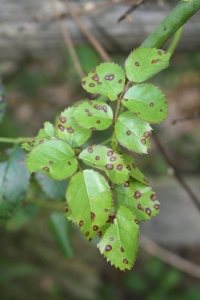 Common fungal, viral and bacterial culprits include brown spot, powdery mildew, rust and damping off. Bacteria and virus usually cause damage after being vectored by sucking insects that introduce the disease. These can be minimized by good husbandry. Healthy plants don’t attract as many bugs.

With molds and fungus, the key is prevention. Buy blight-resistant plants. If you have a serious infection, collect all affected leaves and stems and throw them in the trash or burn them. They contain spores for next year’s infestation (leaf litter is the perfect hiding spot, along with over-wintering insects). By taking precautions now, you will be starting off next spring on a good foot. 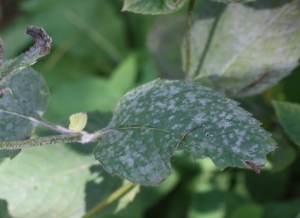 Next spring, when your mold-susceptible plants reach six inches, usually May in Zone 5-6, once a week and after every rain through early July, apply an organic copper-sulfur-based fungicide such as Bordeaux mix, or pre-mixed products like Safer fungicides. Doing so prevents the germination of spores that splash from the soil onto leaves when it rains.

Never water your plants at night. Moisture sitting on the leaves is prime environment for mold and fungal growth. Promote good air circulation by spacing plantings appropriately, leaving plenty of room for maturity and thinning heavy growth so moisture will evaporate quickly. Your due diligence will be rewarded next year by cleaner, healthier plants.

4 Responses to Ick! Mold and Fungus!

Stories from someone who is learning to grow

One life.Live it.Love it